The pieces of the ceremoniously destroyed canvas became the seeds for 17 new works, which I developed over the course of a year and debuted in the exhibition 17 Years Boy: Epilogue on February 8, 2019—a year to the date that the original portrait was destroyed. While the symbols and metaphors are readily apparent, I really wanted this new body of work to speak to the transformative possibilities of activating healing by choosing to address trauma. In the manner of the first 17 hours of the performance, the new body of work sits within the framework of a multimedia installation that includes a 17-minute timelapse video of the creation and destruction of the original portrait (I consider this to be the ghost of the original, now-destroyed image, which no longer exists as a single portrait), an audio installation featuring two musical compositions that were created to accompany the artwork in the installation, and a short film that recalls the first 17 hours of the project, providing context for the full installation.

To me, this body of work symbolizes the challenging, yet beautiful, journey down the path of healing, to transform the horror of unspeakable tragedy into a renewed sense of life and celebration. I wanted to make something new. I wanted it to be reflective of a dark past, but also hopeful for the future. It needed to be about healing and the celebration of Black Boys.

Ideas surrounding monarchy, kingship, royalty, and nobility are part of the subtext of this collection’s discussion of black male imaginings. In a defiant counterpunch to the ways in which Black Boys and men are often portrayed/believed to be—thugs, brutes, savages, rapists, criminals, evil—we (Black folks) elect to imagine our fathers, sons, and brothers instead as “kings,” casting them into positions of imagined power, legacy, and continuity.

Personally, I think there is something useful about the symbolic re-casting of Black figures in positive, venerable roles such as “kings” or “emperors.” However, my interests have developed to consider “monarchy” as a symbolic apparatus of control and consumption—those who possess and wield the greatest powers electing to feed on the hope and promise of the powerless, for their own sustenance, legacy, and preservation. This series features the Monarch Butterfly as a symbol for a few related ideas, in this regard. In one instance, the Monarch’s attraction to Black Boy Hearts is an indication of the power and sweetness that reside in them. But, the Monarchs, which often stand as beautiful representations of metamorphosis, in the context of this collection seek to feast on Black human flesh for their nourishment. It is a story of the interplay between beauty and horror, and one that I feel frames the experiences, present-day and historical, of Black Boys and Men in the United States. 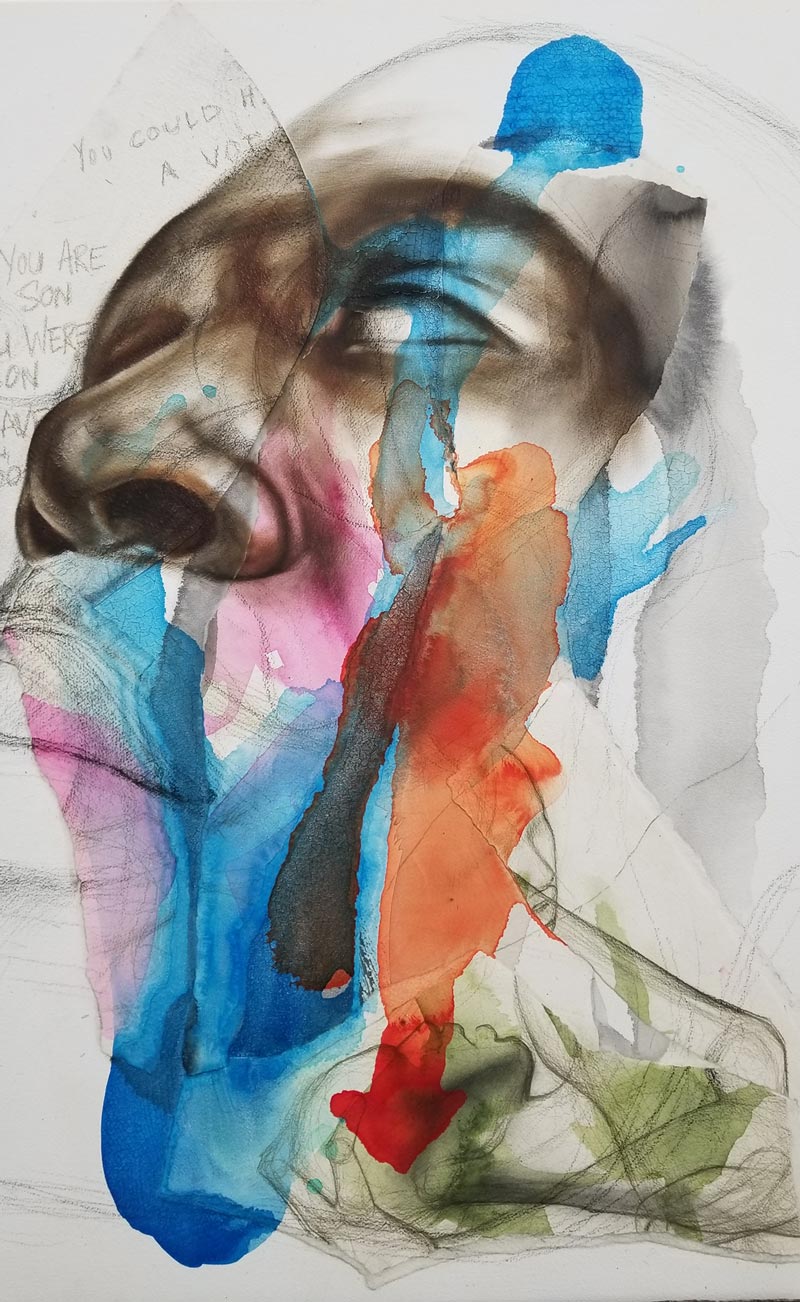 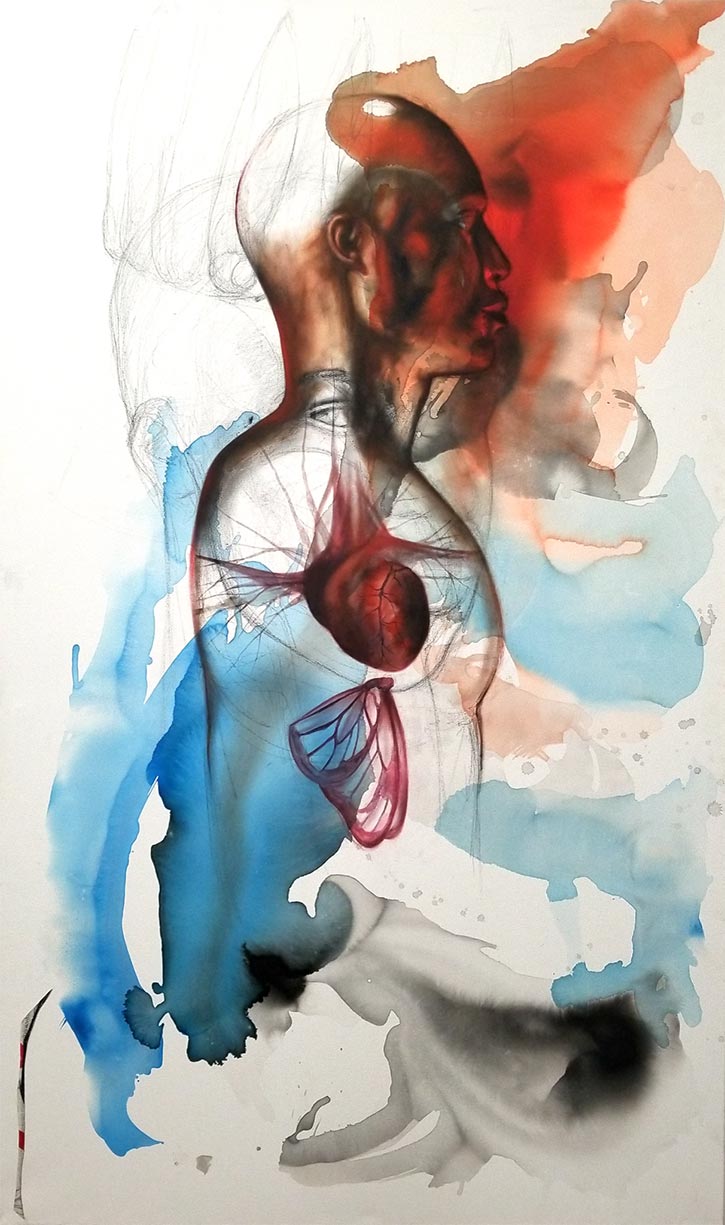 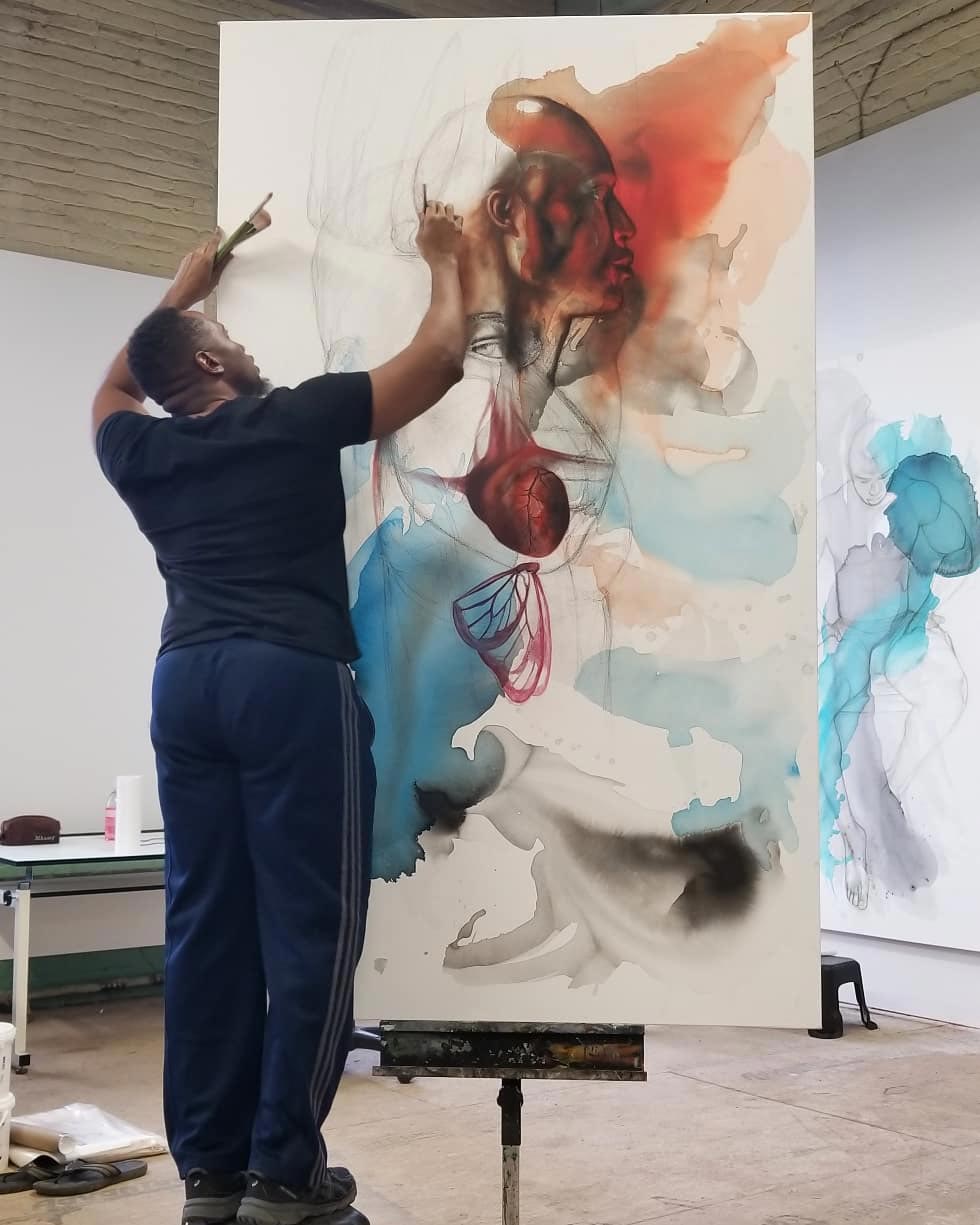 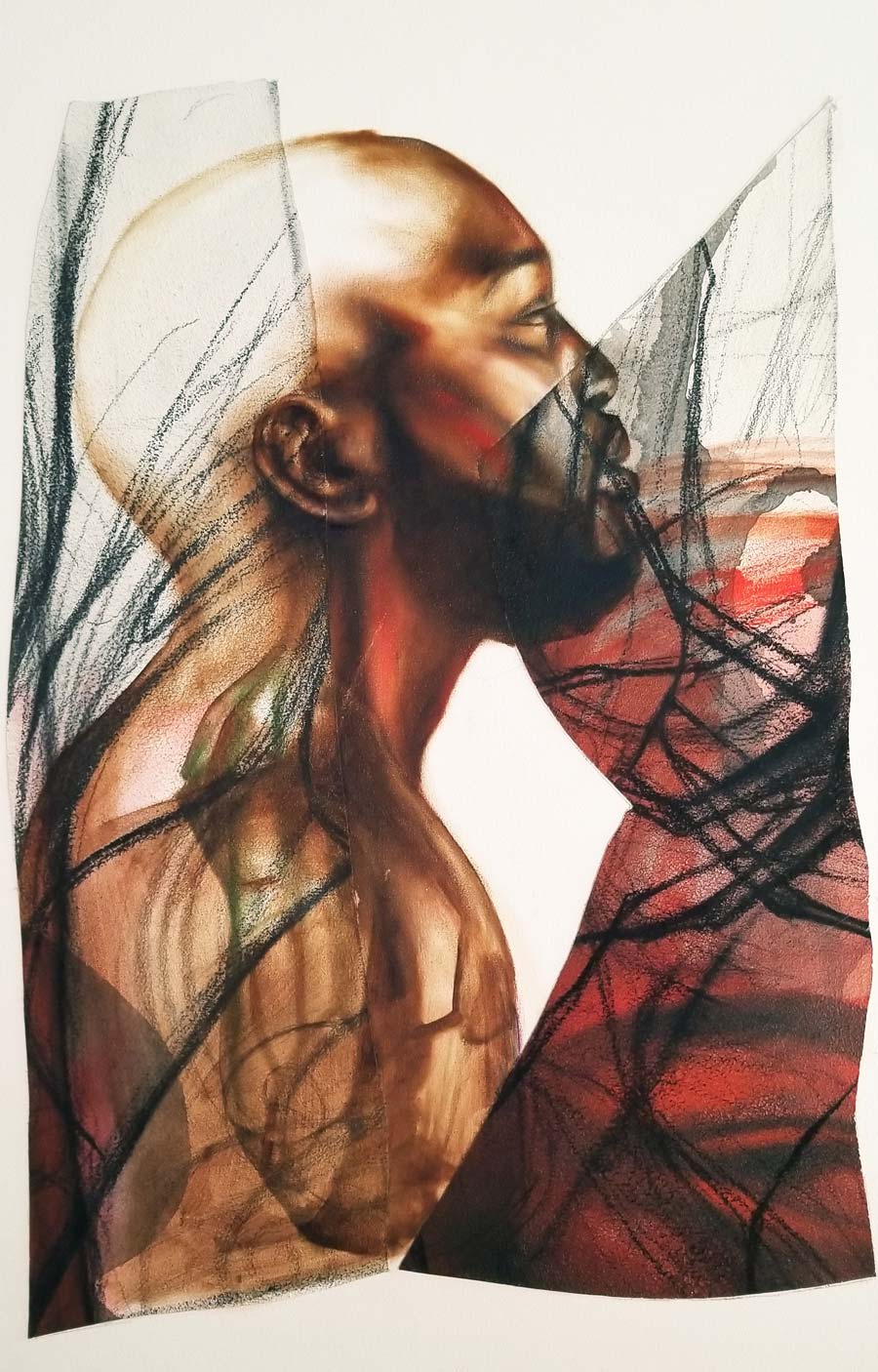 This body of work conceptualizes the angel as a large, brown-skinned being, who is in various stages of appearing (or becoming). The figure is seemingly transfixed by the sight or idea of something that he is witnessing. He appears in full profile view, with a hand covering his face. Between his race, geometric stance, dramatic gesture, and repetitious appearances, I am addressing a number of ideas that are central to this body of artwork.

The angels in this series are mostly black, wingless beings who appear to be ideologically connected to the Black Boys and Men at the center of the presented conversation. In the repeated palm-to-face gesture, we can decipher prayer, quiet thoughtfulness, deep consideration, or a deliberate pause before a mighty demonstration. However, we may also read anguish, despair, anxiety, perhaps a refusal to really see and acknowledge what is occurring, or even an abject blindness to society’s present conditions altogether.

And yet, I am also recalling the idea of grounds and spaces that are “hallowed,” in reference to biblical angels who would cover their faces with their multiple wings in the presence of God out of reverence; or, as in the story of Cain and Able, vocal grounds that are heavily soaked with the deluge of the angry blood of the innocents that have been slaughtered, and the tears and prayers of their wailing mothers.

In this way, the angels might be reflective of our own emotional responses to the ideas that have been brought together in this conversation. Either way, I have taken personal comfort in their presence in this space, and in this collection of artwork. 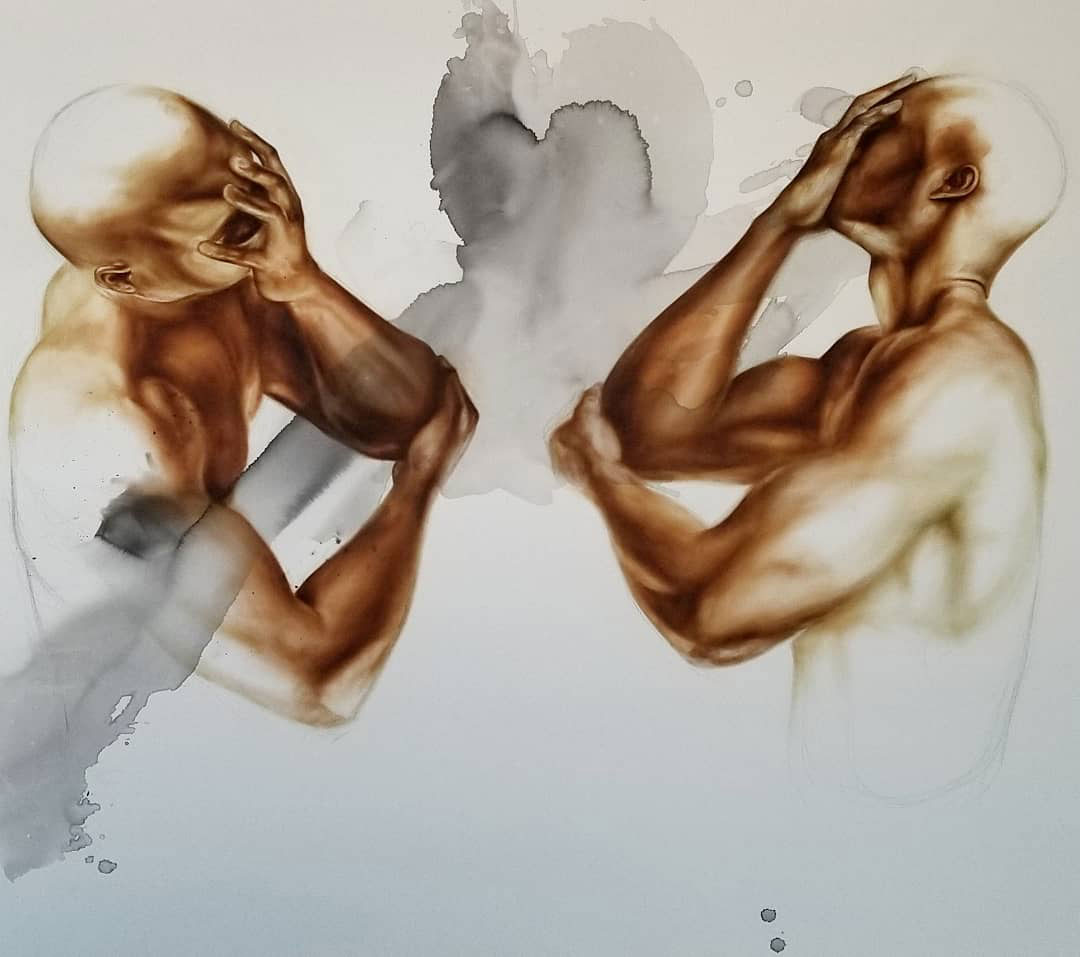 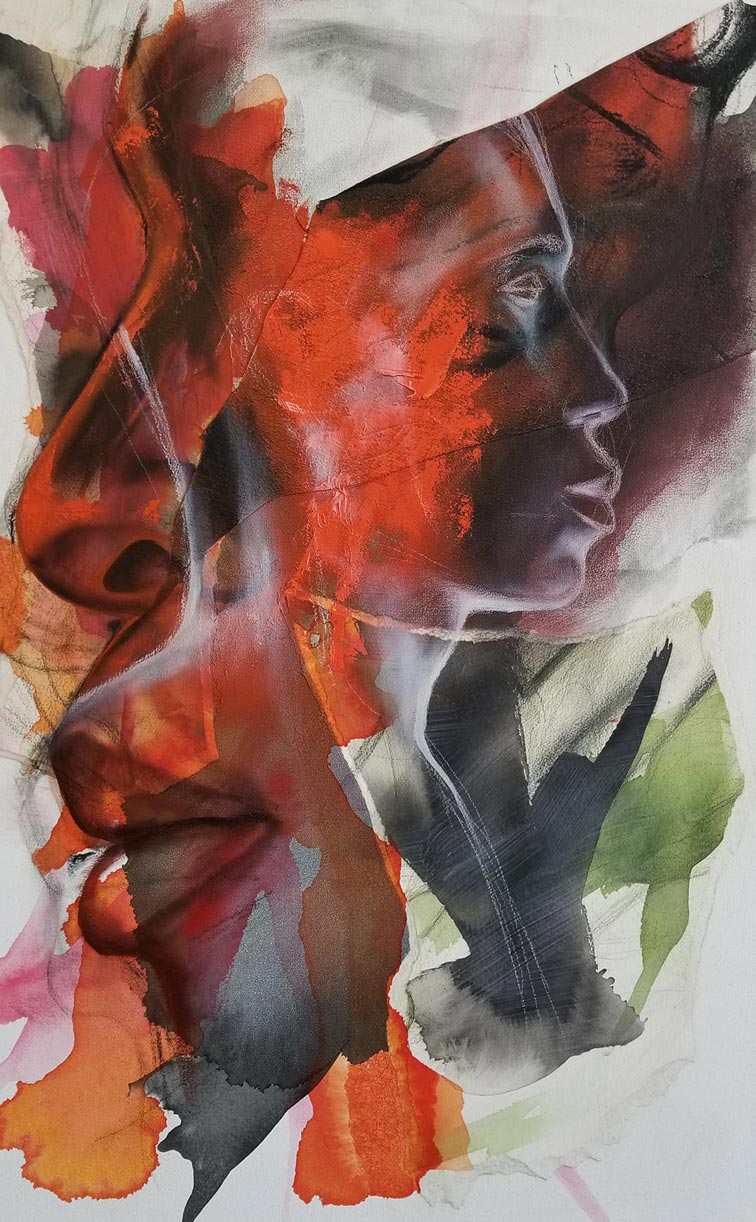 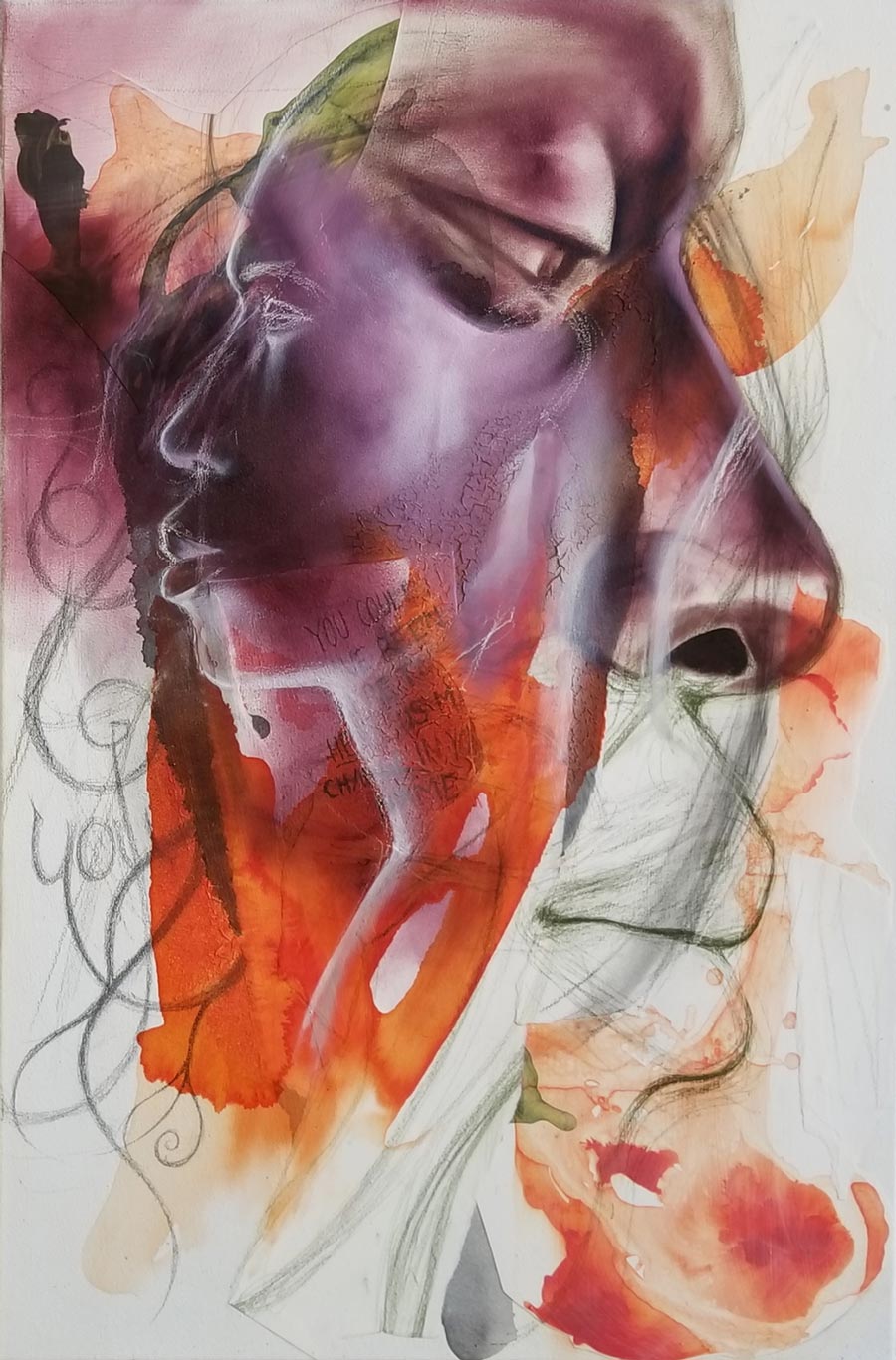